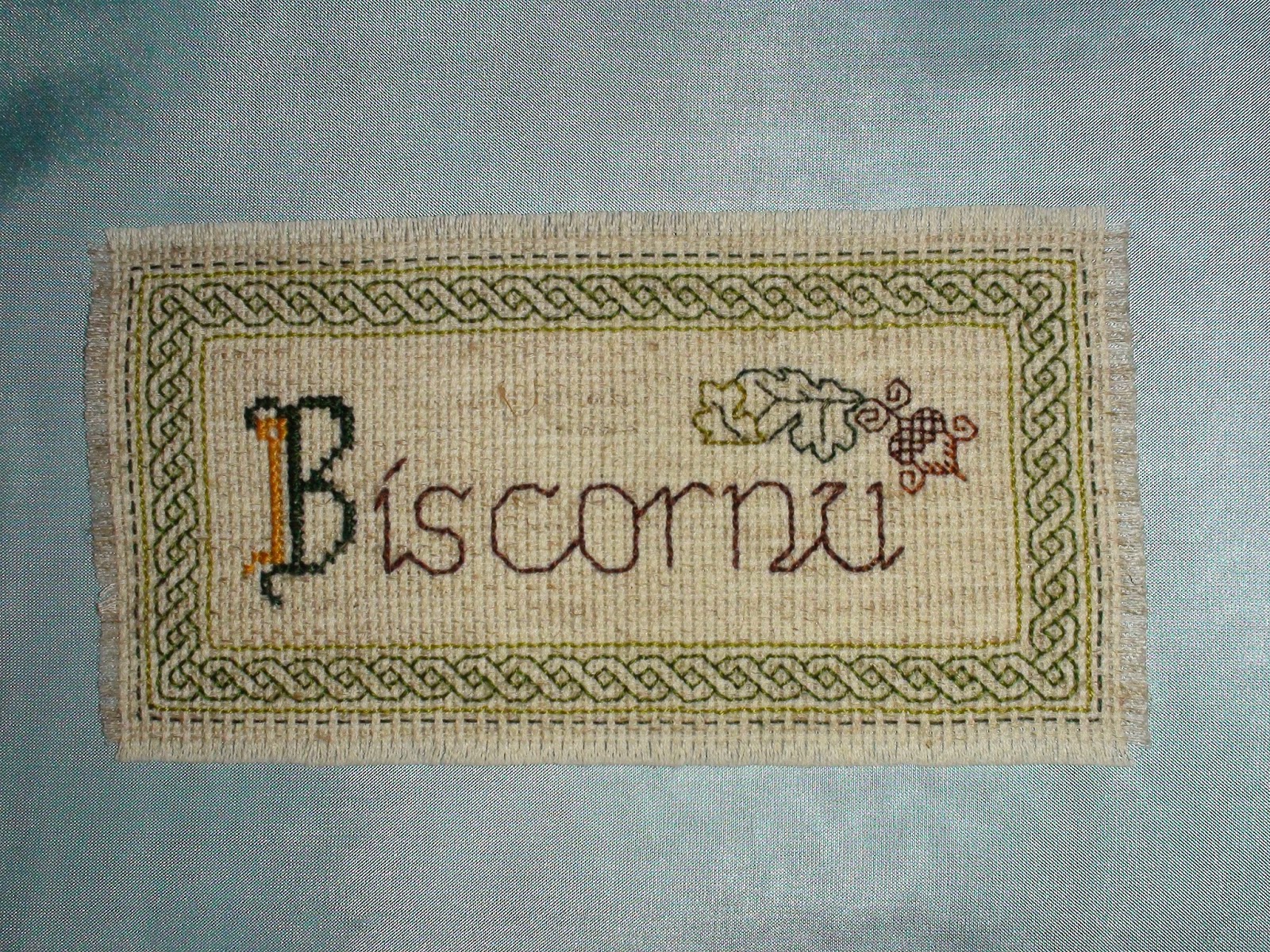 So, what's a Biscornu? How do you do it? According to Wikipedia, it is pronounced "bee-ss-corn-uh)". I thought that it would be like "bis" as in biscuit, "corn" as in corn, and the "u" as in you like biscuits and corn. Good enough. It comes from the French word that means "skewed, quirky or irregular." So it's sort of like me.

It's a pincushion, basically, an eight-sided figure that is stitched so that it has eight sides, stuffed,usually with a button or two in the middle to make it puffy, and big enough to fit in the palm of your hand. It could be decorated with tassels and beads, so I imagine, with the shape it takes, it could also be used as an ornament. I will have to experiment more with these.

But until then, this is how you make a biscornu. Enjoy! 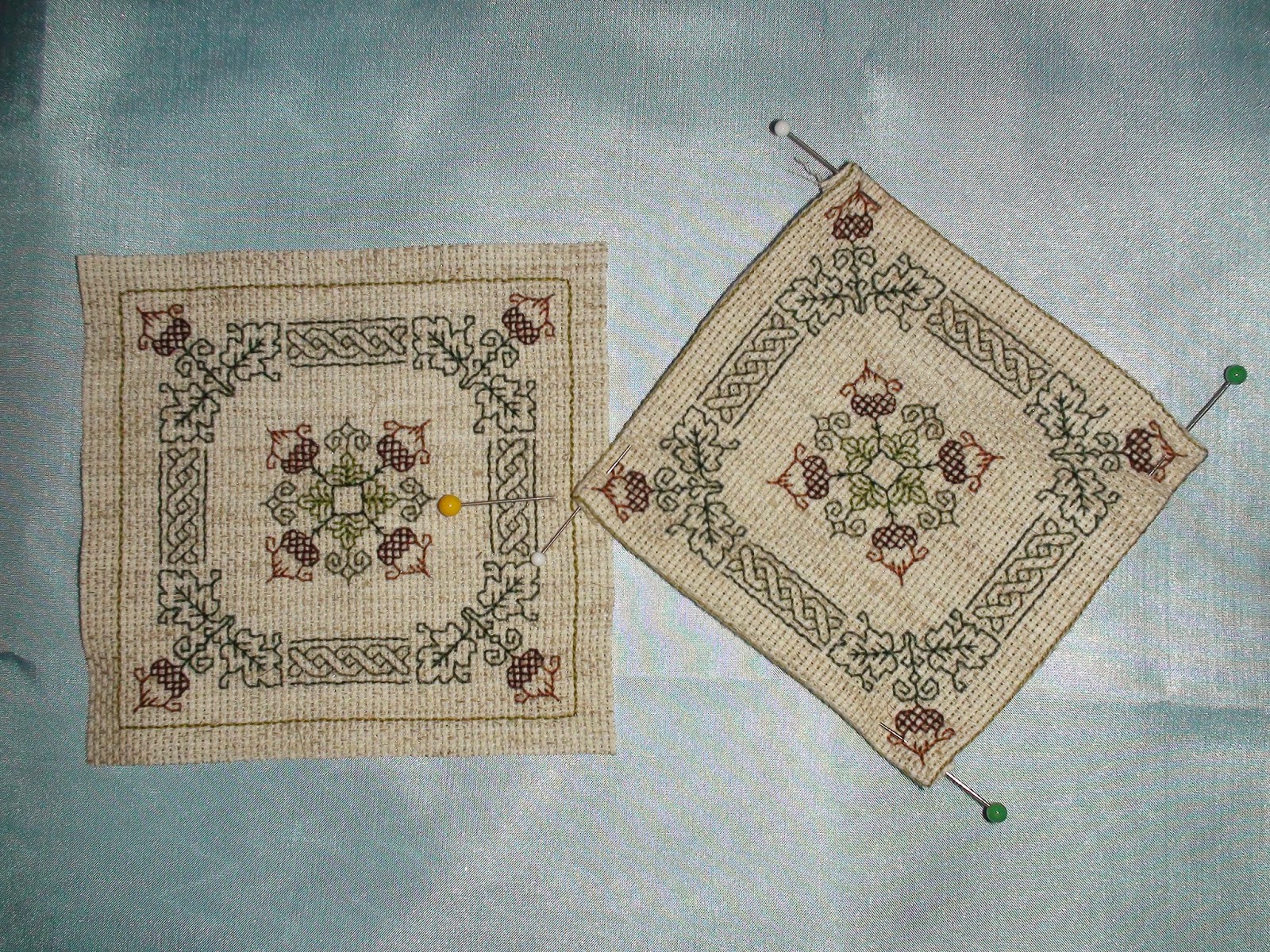 I matched up the corner of one side to the center of the other half. This is what gives it the eight sides and that shape for which it is known.

This is the first side sewn. So far his has been a flat piece. But now each successive side will soon help to give  it that round shape.

Going around the first corner: You just keep going around, matching the corners of one side to the center of the other. This piece traveled around with me. It is a small project so it is easy to carry around. 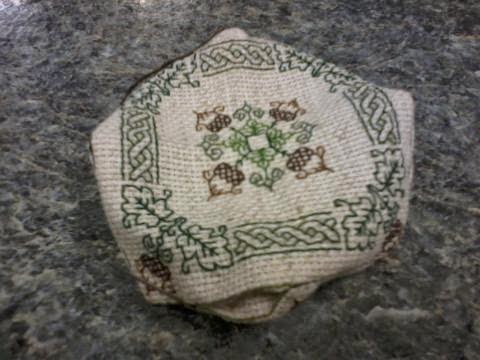 When you are down to the last side, then it's almost ready for stuffing. 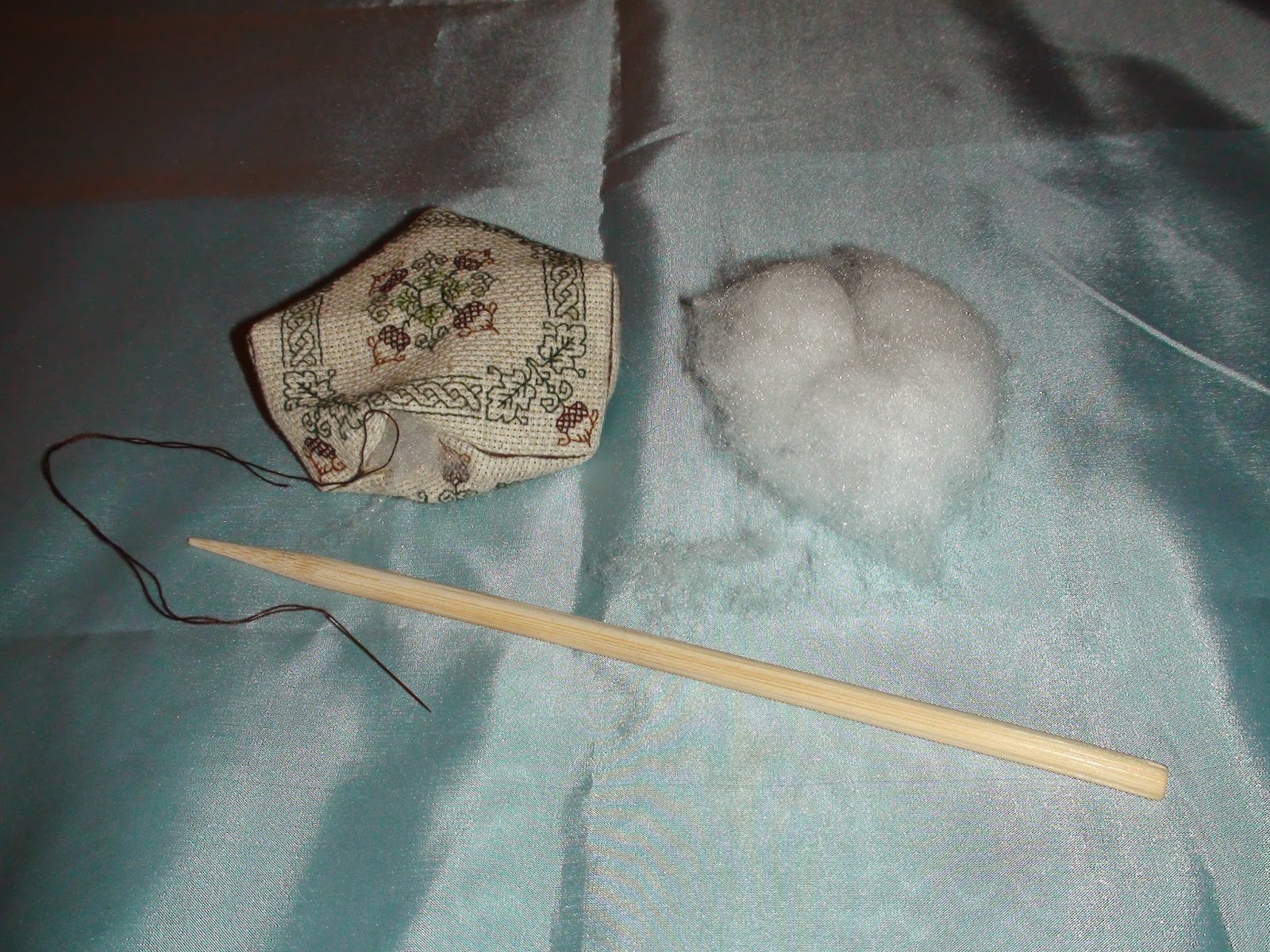 These are the tools for stuffing. I used the 100% Polyester Stuffing that you can get just about anywhere, and a stick from a roasted ear of corn that I sanded  down to make sure it was smooth. I've also used chop sticks that I sanded. You just want to make sure that the pointed end is rounded enough so that it doesn't poke through your fabric. This point helps to direct the batting into corners. 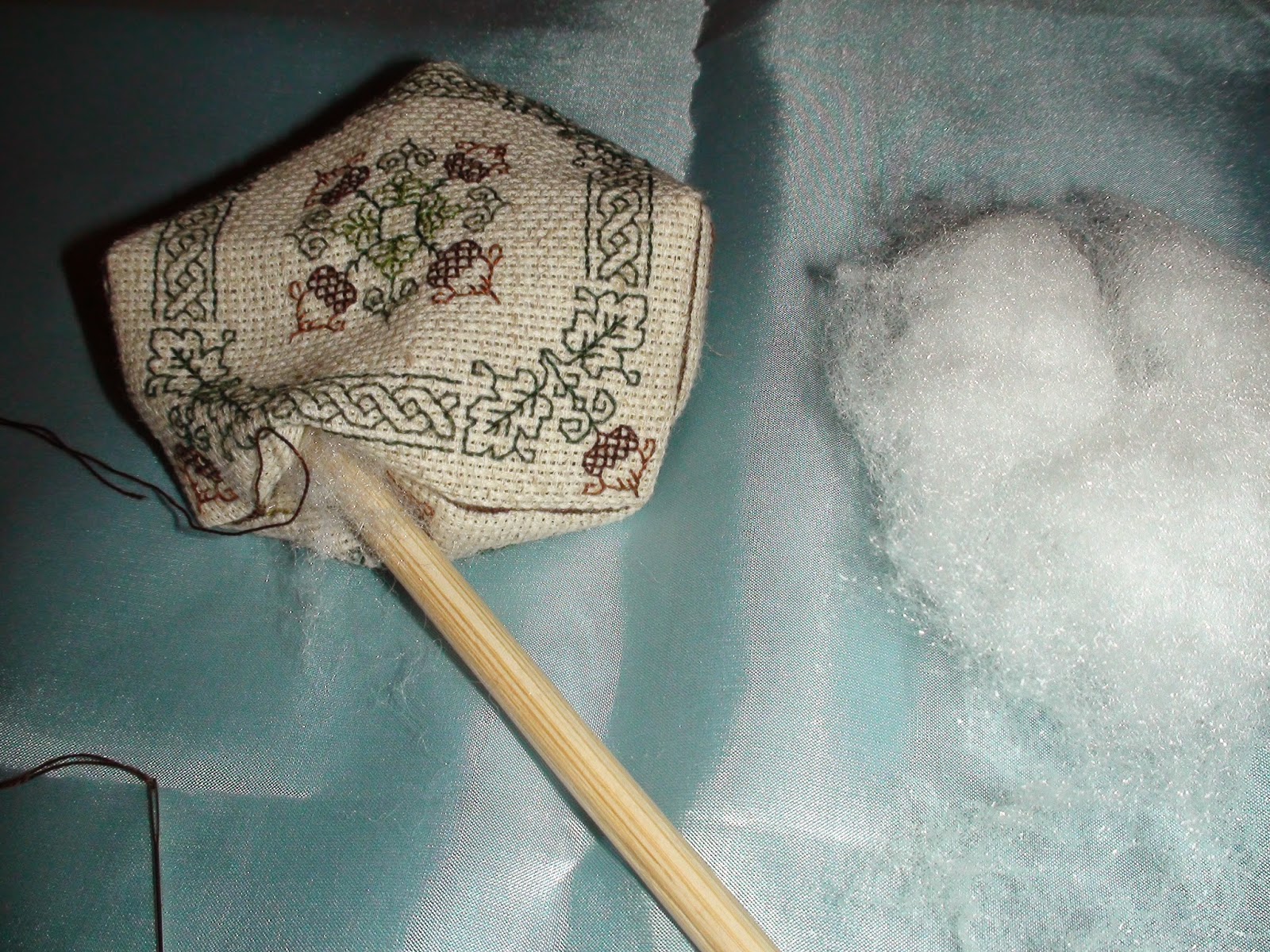 You want the corners to be filled in a little tightly to help hold the shape but don't push in so much that it gets hard. You don't want to pack it in so much that your biscornu isn't soft and squeezable. 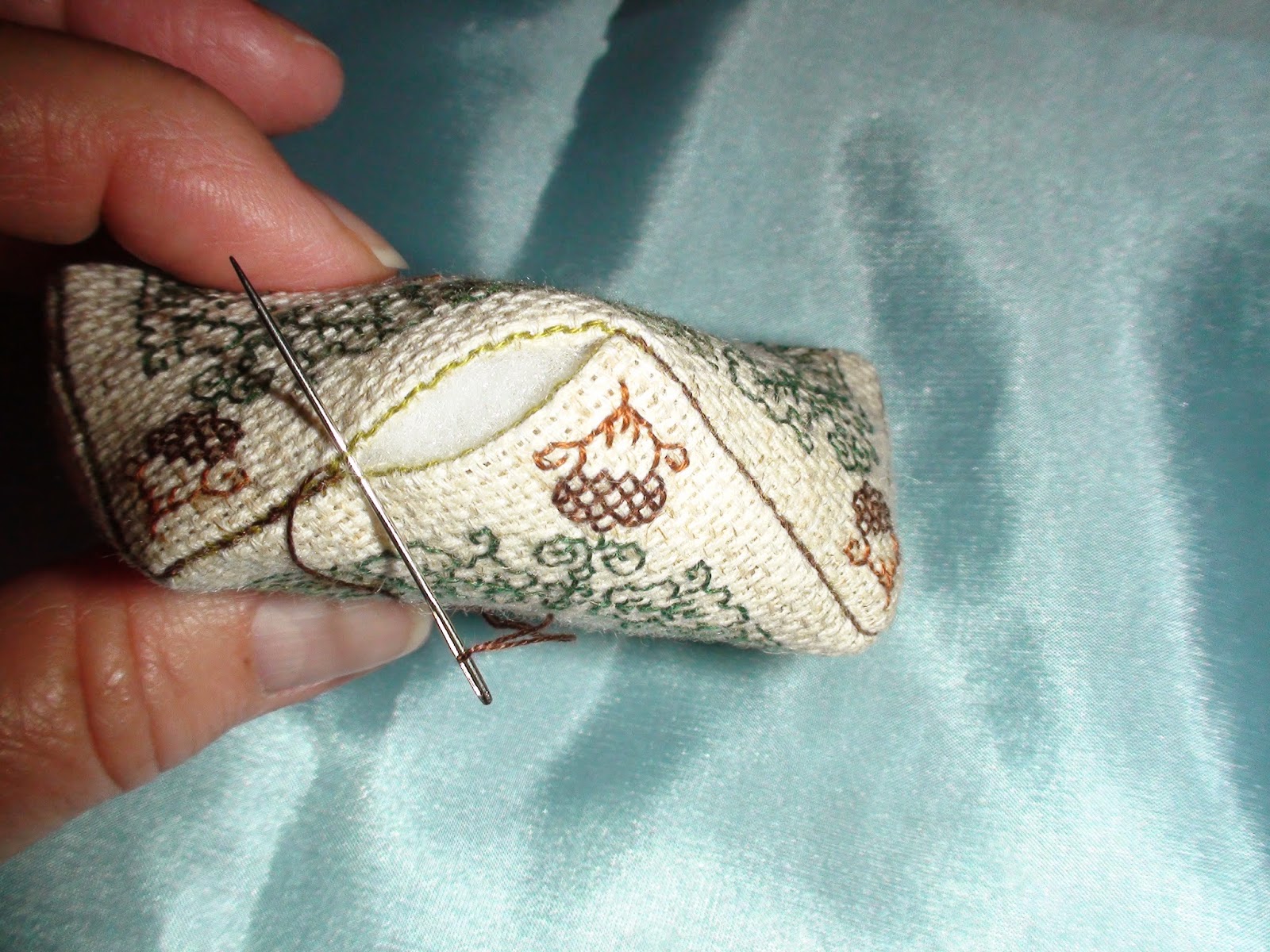 Stitching up the last side. 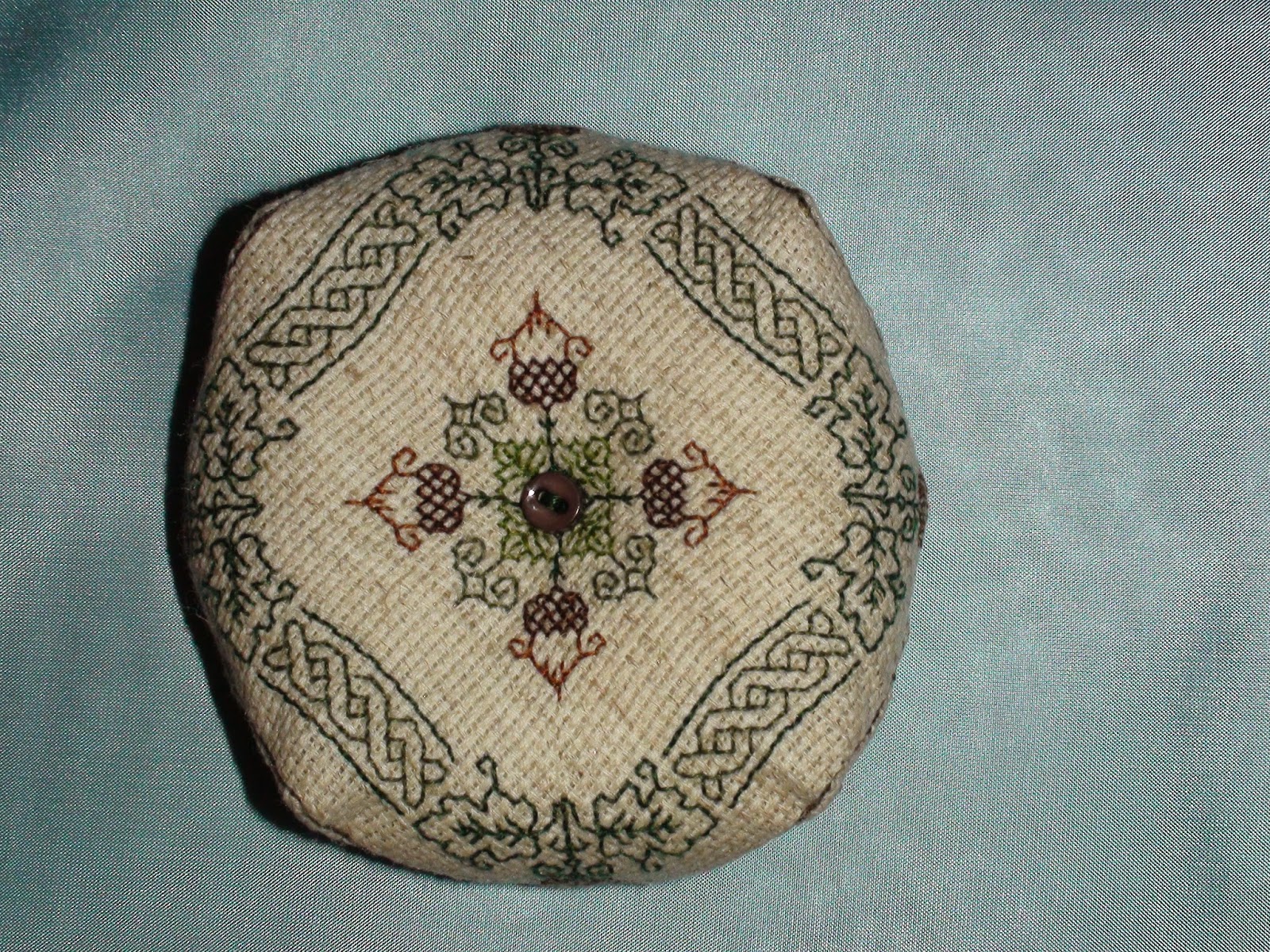 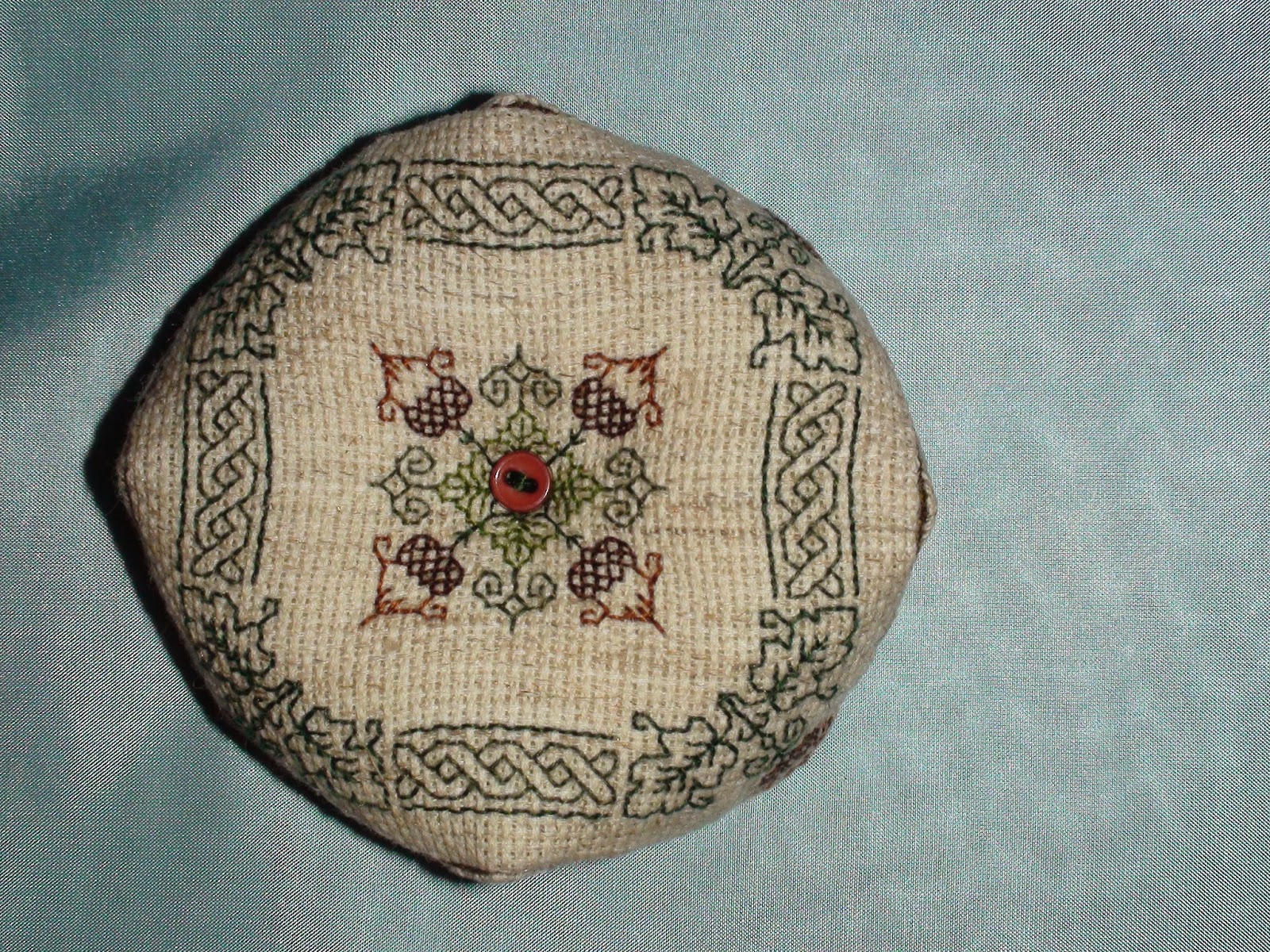 Now that the whole thing is all stitched up - wasn't that fun? - just add a button on top, or one at the top and one at the bottom. They are  1/4" buttons, one dark brown, one light brown, to match with the acorn colors. 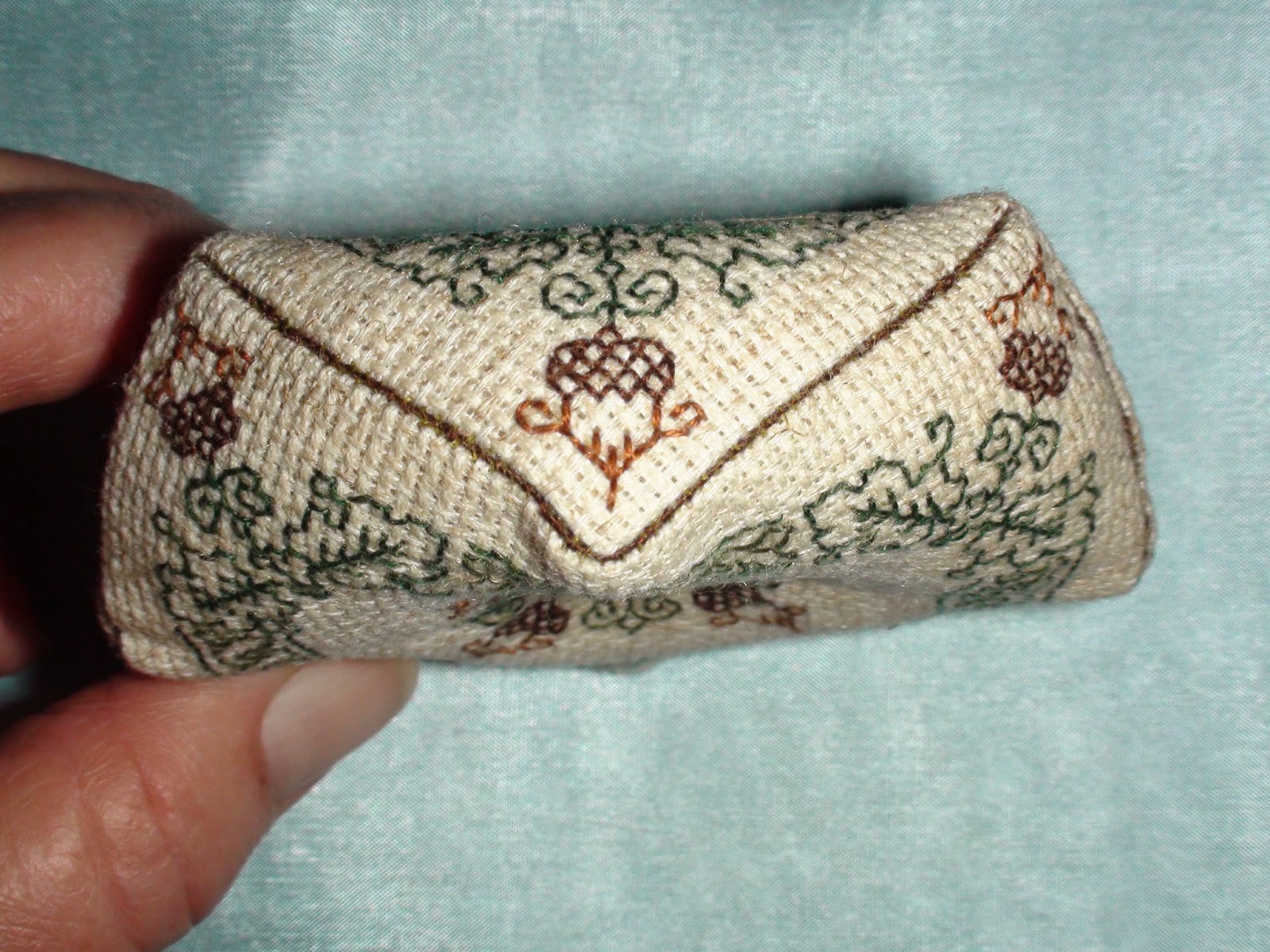 The design takes on new perspective as the edges and corners turn back upon themselves. 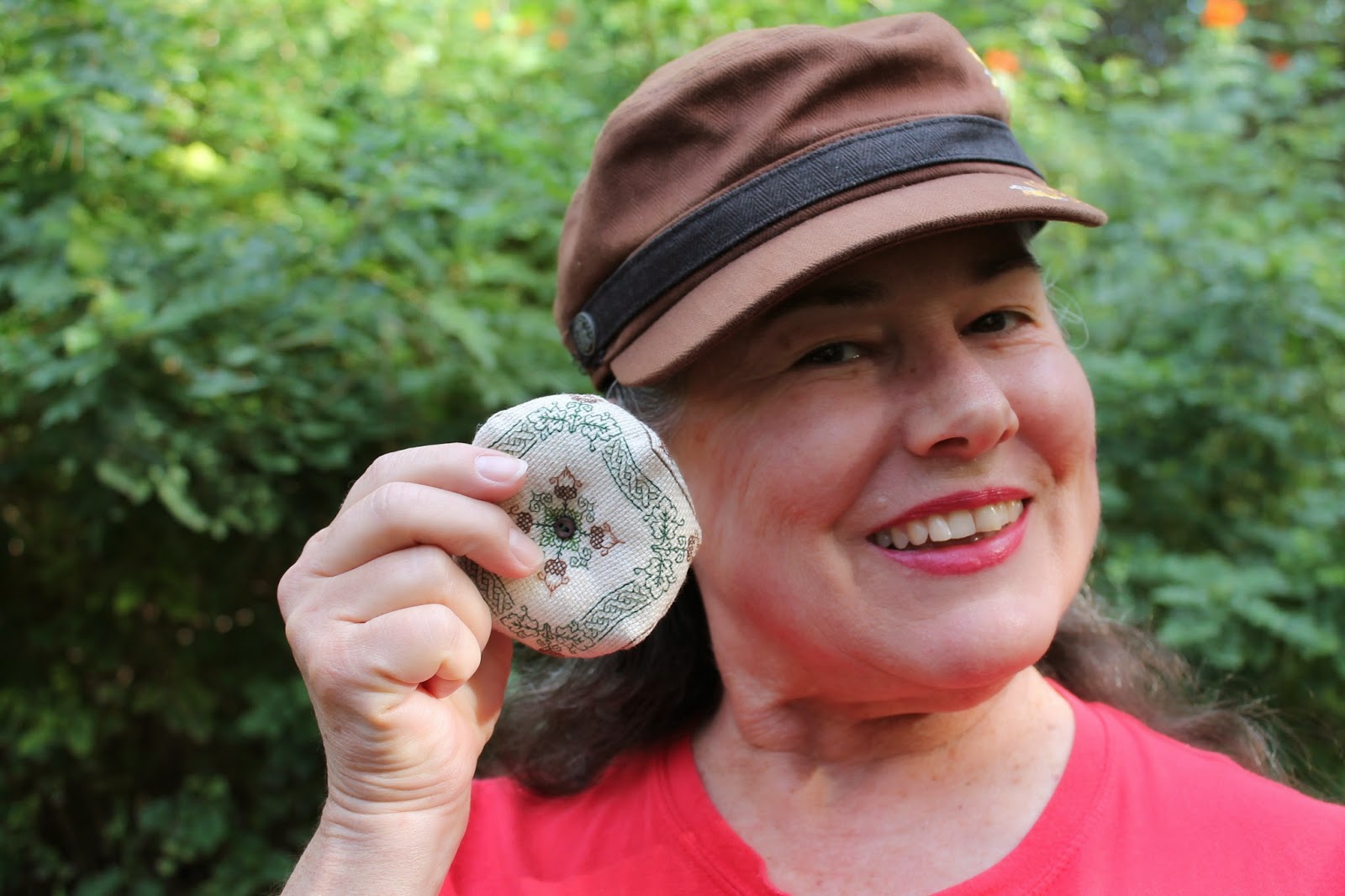 See? Just about big enough to fit in the palm of your hand. 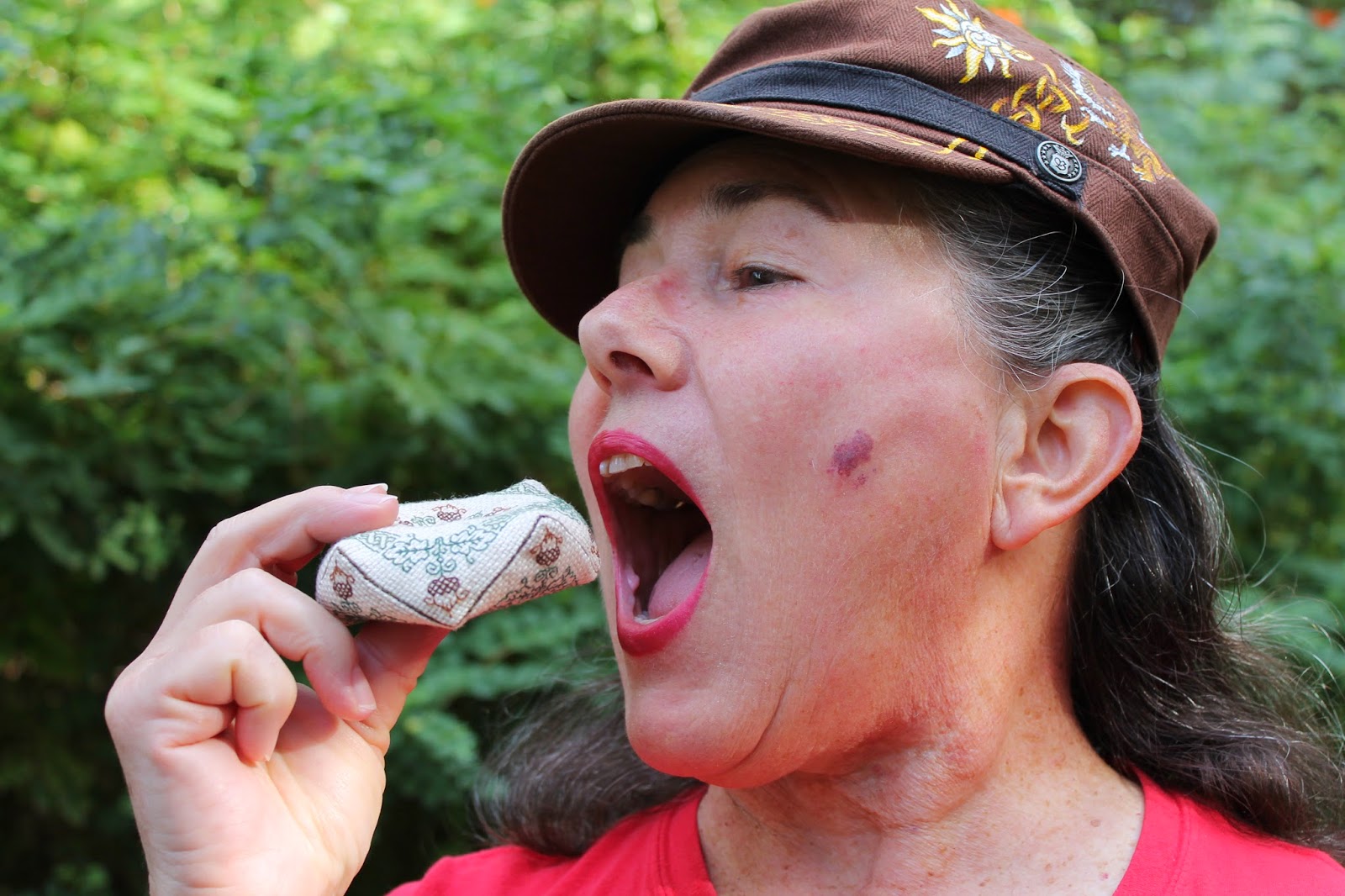 Yep. Reminds me of a biscuit! 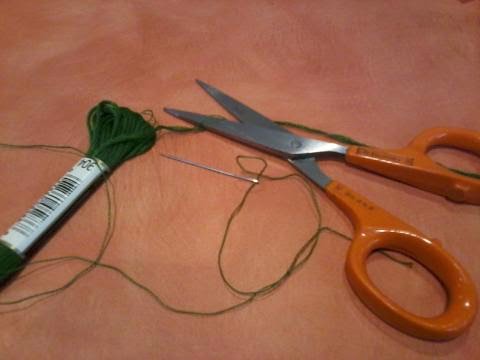 In order to keep from having a bunch of floss pieces that I can't match up, I do this:

I pull out as much thread as I want then cut only as many strands as I need, where the thread comes out from the skein.

I make the cut end near the skein and pull that thread straight out from the rest of the threads. That thread will come out straight and hardly needs to untwist at all.

The rest of the threads will bunch at at my fingertips, but a gentle pull once the cut thread is free, and the remaining uncut threads all straighten out.

It works best to cut and pull just one thread at a time. If I try to pullout two threads, it just tangles.
Posted by Unknown at 1:53 PM No comments: